Ron is a pet red fox that was bought from a licensed exotic animal breeder, in Oklahoma, captive-bred and hand-raised. The state of Arkansas allows pet foxes without any permit needed.
He enjoys a large outdoor habitat and also a small indoor caged spot in my living room. Foxes are said to make ‘bad’ pets, but I would rather say foxes make wonderful pets!… just rather destructive, moody pets, NOT FOR CHILDREN.

Every potential fox owner/companion MUST have an outdoor pen built fox-proof; here’s some examples— http://www.furaffinity.net/view/2812518/ http://raptor-painter.deviantart.com/…

Now the best resource…http://sybilsden.com/caresheet/fox.htm
http://www.raskbb.com/sybilsden/viewf…
It is Sybil’s Message Board. The link is for the Foxes forum…hundreds of posts for you to read up on! 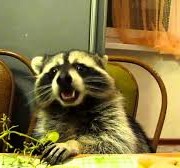 Watch this Raccoon as he eats Grapes at the Dinner Table. 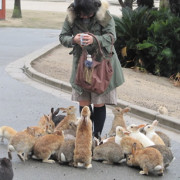 This is the first episode in the Bunny Island Series, featuring Ōkunoshima (大久野島), a small island located in the Inland Sea of Japan in the city of Takehara, Hiroshima Prefecture. It is often called Usagi Jima (ウサギ島, “Rabbit Island”) because of the numerous feral rabbits that roam the island; they are rather tame and will approach humans.

In this video, a herd of rabbits swarm their feeder and have no reservations climbing all over his body to get at the delicious pellets during their mealtime.

The number of rabbits has grown quickly as hunting the fuzzy, hopping creatures is prohibited, and cats and dogs aren’t allowed.

Originally used as a secretive army base to manufacture poison gas and other chemical weapons during World War II, the tiny island of Okunoshima, which was once left off maps, eventually turned into a wild bunny paradise. 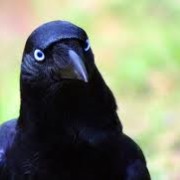 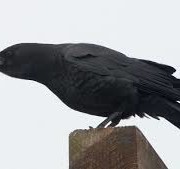 Here another interesting Video on the very intelligent and beautiful Crow 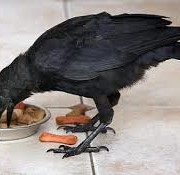 This Video speaks for itself