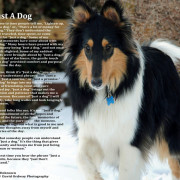 They don’t understand the distance traveled, the time spent,
or the costs involved for “just a dog.”

Some of my proudest moments have come about with “just a dog.”

Many hours have passed and my only company was “just a dog,”
but I did not once feel slighted.

Some of my saddest moments have been brought aobut by
“just a dog,” and in those days of darkness, the gentle touch
of “just a dog” gave me comfort and reason to overcome the day.

If you, too, think it’s “just a dog,” then you probably understand
phrases like “just a friend,” “just a sunrise,” or “just a promise.”

“Just a dog” brings into my life the very essence of friendship,
trust, and pure unbridled joy.
“Just a dog” brings out the compassion and patience
that make me a better person.
Because of “just a dog” I will rise early, take long walks and look
longingly to the future.

So for me and folks like me, it’s not “just a dog”
but an embodiment of all the hopes and dreams of the future,
the fond memories of the past, and the pure joy of the moment.

“Just a dog” brings out what’s good in me and diverts my thoughts
away from myself and the worries of the day.

I hope that someday they can understand that its’ not “just a dog”
but the thing that gives me humanity and keeps me from being
“just a man” or “just a woman.”

So the next time you hear the phrase “just a dog,”
just smile,
because they “just don’t understand.” 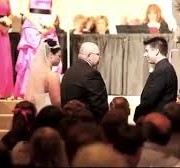 After 21 years of marriage, I discovered a new way of keeping alive the spark of love. A little while ago I had started to go out with another woman. It was really my wife’s idea.

“I know that you love her,” she said one day, taking me by surprise.

“But I love YOU,” I protested.

The other woman that my wife wanted me to visit was my mother, who has been a widow for 19 years, but the demands of my work and my three children had made it possible to visit her only occasionally.

That night I called to invite her to go out for dinner and a movie.

“What’s wrong, are you well,” she asked?

My mother is the type of woman who suspects that a late night call or a surprise invitation is a sign of bad news.

“I thought that it would be pleasant to pass some time with you,” I responded. “Just the two of us.”

She thought about it for a moment then said “I would like that very much.”

That Friday after work, as I drove over to pick her up I was a bit nervous.
When I arrived at her house, I noticed that she, too, seemed to be nervous
about our date.

She waited in the door with her coat on. She had curled her hair and was
wearing the dress she had worn to celebrate her last wedding anniversary.
She smiled from a face that was as radiant as an angel’s.

“I told my friends I was going to go out with my son, and they were impressed,” she said, as she got into the car. “They can’t wait to hear about our meeting”.

We went to a restaurant that, although not elegant, was very nice and cozy.
My mother took my arm as if she were the First Lady.

After we sat down, I had to read the menu. Her eyes could only read large print. Half way through the entrée, I lifted my eyes and saw Mom sitting there staring at me. A nostalgic smile was on her lips. “It was I who used to have to read the menu when you were small,” she said.

“Then it’s time you relax and let me return thefavor,” I respond.

During the dinner we had an agreeable conversation -nothing extraordinary –
but catching up on recent events of each others life.

We talked so much we missed the movie. As we arrived at her house later, she
said “I’ll go out with you again, but only if you let me invite you”.

“How was your dinner date?” asked my wife when I got home.

“Very nice. Much more so than I could have imagined,”I answered.

A few days later my mother died of a massive heart attack. It happened so
suddenly I didn’t have a chance to do anything for her.

Some time later I received an envelope with a copy of a restaurant receipt
from the same place mother and I had dined. An attached note said: “I paid
this bill in advance. I was almost sure I couldn’t be there but, never-the-less, I paid for two plates – one for you and the other for your wife. You will never know what that night meant for me. I love you.”

At that moment I understood the importance of saying, in time: “I LOVE YOU” and to give our loved ones the time they deserve.

Nothing in life is more important than God and your family. Give them the time they deserve, because these things cannot be put off to “some other time”.

Recently I overheard a mother and daughter in their last moments together at the airport. They had announced the departure.

Standing near the security gate, they hugged and the mother said “I love you and I wish you enough”..

The daughter replied, “Mom, our life together has been more than enough.. Your love is all I ever needed. I wish you enough, too, Mom”.

They kissed and the daughter left.

The mother walked over to the window where I was seated. Standing there I could see she wanted and needed to cry. I tried not to intrude on her privacy but she welcomed me in by asking “Did you ever say goodbye to someone knowing it would be forever?”

“Yes, I have,” I replied. “Forgive me for asking but why is this a forever goodbye?”.

“I am old and she lives so far away. I have challenges ahead and the reality is — the next trip back will be for my funeral” she said.

“When you were saying goodbye, I heard you say ‘I wish you enough’. May I ask what that means?”. She began to smile.

“That’s a wish that has been handed down from other generations. My parents used to say it to everyone”.
She paused a moment and looked up as if trying to remember it in detail she smiled even more.

“When we said ‘I wish you enough’ we were wanting the other person to have a life filled with just enough good things to sustain them”.

Then turning toward me she shared the following as if she were reciting it from memory:

She then began to cry and walked away.

They say it takes a minute to find a special person, an hour to appreciate them, a day to love them, but then an entire life to forget them.

Send this to the people you will never forget and remember to send it back to the person who sent it to you.

If you don’t send it to anyone it may mean that you are in such a hurry that you have forgotten your friends.

To all my friends and loved ones,

I Wish You Enough !

The most destructive habit…………………………Worry
The greatest Joy………………………………………Giving
The greatest loss………………….Loss of self-respect
The most satisfying work………………..Helping others
The ugliest personality trait………………..Selfishness
The most endangered species……..Dedicated leaders
Our greatest natural resource………………..Our youth
The greatest “shot in the arm”………..Encouragement
The greatest problem to overcome………………….Fear
The most effective sleeping pill………Peace of mind
The most crippling failure disease…………….Excuses
The most powerful force in life……………………..Love
The most dangerous pariah………………….A gossiper
The world’s most incredible computer…….The brain
The worst thing to be without……………………. Hope
The deadliest weapon………………………..The tongue
The two most power-filled words……………..”I Can”
The greatest asset…………………………………..Faith
The most worthless emotion………………….Self-pity
The most beautiful attire…………………………..SMILE!
The most prized possession………………….. Integrity
The most powerful channel of communication…….Prayer
The most contagious spirit………………..Enthusiasm 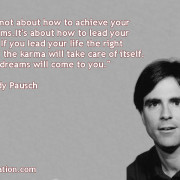 Carnegie Mellon Professor Randy Pausch (Oct. 23, 1960 – July 25, 2008) gave his last lecture at the university Sept. 18, 2007, before a packed McConomy Auditorium. In his moving presentation, “Really Achieving Your Childhood Dreams,” Pausch talked about his lessons learned and gave advice to students on how to achieve their own career and personal goals. 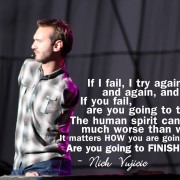